Seventh House Democrat calls on Madigan to hand over speaker’s gavel now: ‘It’s the right thing to do’

Home Seventh House Democrat calls on Madigan to hand over speaker’s gavel now: ‘It’s the right thing to do’ 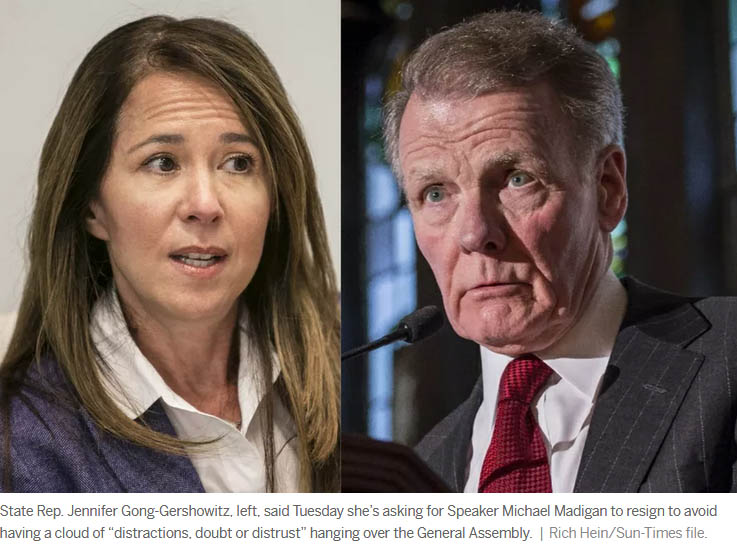 Seventh House Democrat calls on Madigan to hand over speaker’s gavel now: ‘It’s the right thing to do’

The freshman North Shore legislator has received nearly $247,000 from Madigan. She said she called the speaker to let him know she’d be calling for him to step down, but didn’t offer more details about their call.

A north suburban legislator who has benefited from nearly $247,000 in contributions from House Speaker Michael Madigan is now calling for the beleaguered political powerhouse to step down, saying the Legislature can’t function below a cloud of “distractions, doubt or distrust.”

State Rep. Jennifer Gong-Gershowitz is joining the slowly growing list of House Democrats calling on Madigan to immediately resign from his leadership roles in the Illinois House and the state’s Democratic Party, saying federal investigations into corruption “at the highest levels have created a crisis of confidence and undermined the integrity and public trust that leadership demands.”

“If we are to move our state forward, Speaker Madigan must not continue to serve in the role of Speaker of the House or as Chair of the Illinois Democratic Party,” the Glenview Democrat said in a statement. “I understand and agree with many of my colleagues’ concerns about due process.

“I fully support due process for Speaker Madigan and anyone else with respect to ongoing criminal investigations. However, whether someone should retain leadership positions in the General Assembly and the Illinois Democratic Party is a question of moral, ethical, and personal judgement, not criminal process. Leadership is a privilege, and we must hold our leaders to a higher standard.”

Madigan has not been charged with any crime, but last month, a federal court filing implicated him in an alleged bribery scheme in which ComEd is accused of sending $1.3 million to Madigan’s associates for doing little or no work for the utility.

Madigan has denied any wrongdoing and said he has no plans to resign.

In an interview with the Sun-Times, Gong-Gershowitz — whose district covers parts of Evanston, Wilmette and Glenview — said she was calling for Madigan to step down now because “it’s the right thing to do.”

“We’re also confronting some of the most consequential challenges of our lifetime, and we can’t afford distractions, doubt and distrust, to hang over our work in the General Assembly,” Gong-Gershowitz said. “I had an opportunity to talk to my constituents, and they’ve made their voices loud and clear, and it’s my responsibility to respect my constituents and to represent their interests.”

The freshman North Shore lawmaker said she called the speaker to let him know she’d be calling for him to quit, but didn’t offer more details about the call.

Gong-Gershowitz, who has represented her district since January of last year, reported accepting $246,902.81 in in-kind contributions from campaign funds controlled or connected to Madigan from 2018 to June. The contributions largely went to expenses such as payroll and postage.

She said she doesn’t intend to give that money back because it was donated to her before Madigan was implicated in a federal bribery scheme involving ComEd.

“I sought support from the Democratic Party of Illinois just like Republicans seek support from their party, and most importantly that support has not influenced my votes or my legislative agenda,” Gong-Gershowitz said. “I’m proud of my record. I have served as a freshman legislator, motivated by one thing and one thing only and that is to represent my district to the best of my ability. That’s exactly what I’ve done and I’m proud to stand behind my decisions and my record.”

The number of Democrats calling on Madigan to relinquish his leadership positions is growing, although the list of House Democrats making that call is growing more slowly.

Gong-Gershowitz joins six other members of Madigan’s caucus calling on him to step down immediately: North Siders Jonathan “Yoni” Pizer and Kelly Cassidy, Stephanie Kifowit of Oswego, Lindsey LaPointe of the Northwest Side, Terra Costa Howard of Glen Ellyn and Anne Stava-Murray of Naperville.

Democratic state senators and Chicago aldermen have also called for Madigan to give up his party post and the speaker’s gavel he has held for all but two years since 1983.

The list of non-House Democrats seeking Madigan’s immediate ouster grew markedly on Tuesday with the release of a letter signed by more than 50 elected and party officials.

Two weeks ago, Madigan dialed up some Democrats in the House, asking them whether they’re with him or against him and said he largely liked what he heard in those telephone chats.

Responding to the defections, Madigan said in a statement “there have always been differences within the Democratic party.”

“I have devoted my entire career to working with all Democrats in Illinois,” Madigan said. “I will continue to do that, especially as we face defeating Donald Trump, who has a track record of sowing division and suppressing minority voices.

“As Trump ends the Census count early, ensuring all of our communities are fairly and fully represented has been and will continue to be a main priority of mine as the Chairman of the Democratic Party of Illinois.”