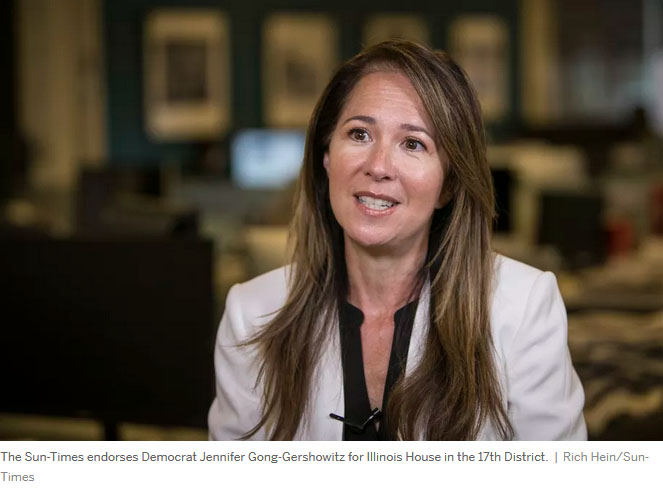 The district is in the fine hands of an immigration lawyer who looks out for children and calls out House Speaker Michael Madigan.

Soon after being elected to her first term two years ago, Democratic state Rep. Jennifer Gong-Gershowitz, an immigration lawyer, went to work on legislation to help protect children when they must contend with our nation’s antiquated immigration system.

One bill, co-sponsored by Illinois House Republican Leader Jim Durkin, lets parents designate a short-term guardian for their children if they are detained or deported. Another bill establishes protections for abused, abandoned or neglected immigrant children.

If the district weren’t so ably represented by Gong-Gershowitz, we would give a nod to challenger Christopher Kruger of the Illinois Green Party. Kruger, of Evanston, is a thoughtful lawyer with a record of taking on consumer affairs and civil rights cases.

But the district is in good hands with Gong-Gershowitz, of Glenview, whom we endorse. She is showing an independent streak by calling for Illinois House Speaker Michael Madigan to step down amid federal investigations of corruption. Madigan has not been charged with a crime. Still, Gong-Gershowitz says, “We cannot afford distractions or distrust to hang over our work in the General Assembly.”